Visit our Blog and find out more about Myths, Tales & Curiosities of our favorite stories

The Punishment of Prometheus 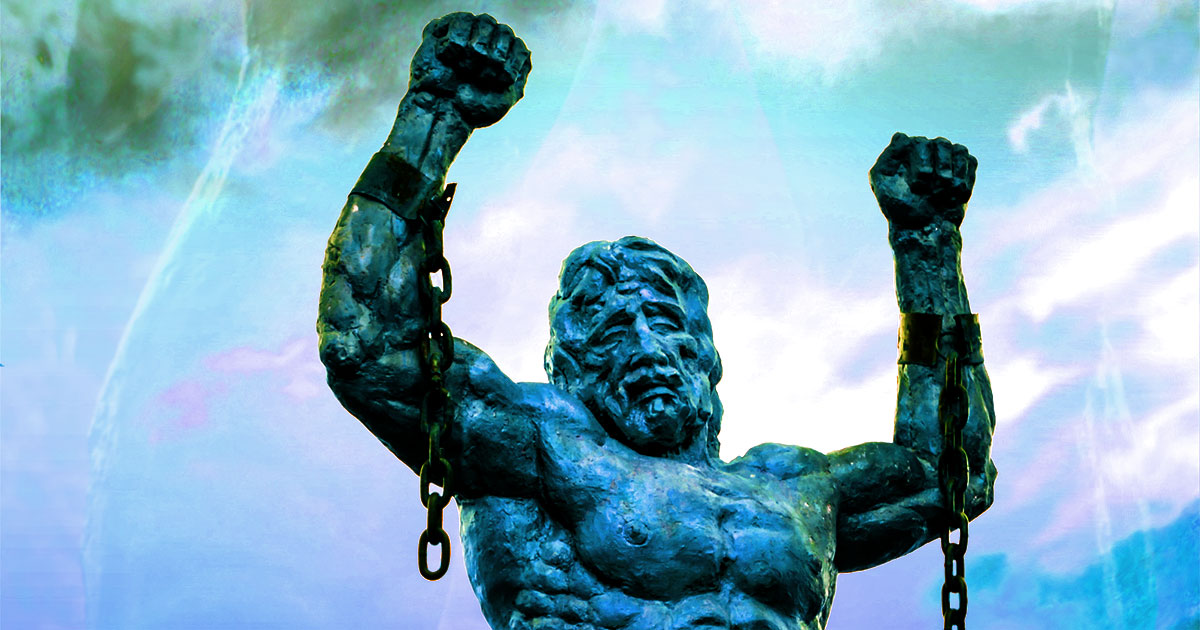 He was a Titan that fought side by side with the Olympian gods but that did not prevent him to suffer one of the worst punishments Zeus has ever given to anyone. His deeds would mark the beginning of human technological evolution which would take us to become a space exploration species.

Improve Your Experience by Listening to “Weyland” on Spotify

Prometheus was a Titan, the dominant race of gods before the Titanomachy takes place. He was the son of the Titan Iapetus, son of Uranus and Gaia, with Clymene, a water-nymph daughter of Oceanus and Tethys.

“Forethought” was the meaning of his name, therefore Prometheus was intelligent and very resourceful. When war came over to the world of the gods, he promptly offered himself as counselor of the Titans, but the brute mind of these older gods didn’t give him any credit.

Feeling excluded, he swapped sides and offered the Olympians his abilities. He also brought his brother, Epimetheus – which name means afterthought. Both brothers aided to win the 10 years’ war with the old gods and later on helped them to build the new order of everything, including the creation of the animals and especially the humankind.

But what marks Prometheus the most is his love for his creation. This is the story we would like to briefly tell. There are two versions on how everything happened.

The first one begins

In this version all started after Prometheus and his brother created the humans and the other animals. Here, we need to make a short note about that because there are 2 ways that this might have happened:

On the 1st version, after a huge flood, his son and daughter in law, Deucalion and Pyrrha were the only survivors becoming the first of the humans (look at that);

On the 2nd version, the victorious Zeus rewarded the help they gave and the canny mind of the brothers with the mission to create everything in the world. Prometheus created all the things while his brother gave gifts for every creation, leaving the humans, made from clay, for last.

To all the living things Epimetheus gave incredible gifts. For some, he presented with claws and teeths, to others, wings and to some, the ability to breath underwater. When he finally got to humankind, he didn’t have any gift left.

Seeing those nude and fragile creatures, made from clay, and understanding they would not have any advantage to thrive over the other species, Prometheus felt sorry and decided to give them the ultimate prize of all.

It was when he had the idea to sneak into Mount Olympus and pick up a special thing from his fellow gods Athena and Hephaestus’s workshop. That special thing was creative fire. He took it and hid in a hollow fennel-stalk and brought it to the human beings.

He then taught them how to use the gift of fire to cook and do metalwork and would be forever associated with science, technological advance and culture.

The second version: Trick at Mecone

The second version takes place at Mecone where Hesiod puts Zeus in the centre of the story in his Theogony. This time, humankind already had the knowledge of fire and was prospering accordingly.

Humans and gods met at Mecone to decide on how humans should pay tribute to the gods. Both, mortals and immortals decided that a sacrifice should take place to honour those ruling the cosmos.

An ox was slayed as offering. Zeus and the gods should take the best part of the meat and humans would have the bones and less nutritious and flavorless bits. That ritual continued for some time on.

One day, Prometheus, seeing his creation unfairly suffering with the bad food and famine, decided to take action and made a plan for the next sacrifice.

Not noticing anything, Zeus accepted the offering and went back to Olympus to enjoy his feast. When Zeus realised the trick, it was too late. Furious, the king of the gods punished humankind by taking away the gift of fire, leaving the world in total darkness, cold and despair.

Once again, feeling sorrow for his children, Prometheus entered the Olympus and stole back the fire to give to humans. Not noticing the trick, Zeus could not avoid humankind to develop and was long after the thievery that he saw the grown cities and huge populations, thriving over the darkness he left behind.

The part where the legends cruelly convert

Whatever version you would like to follow, we believe that we can only assume that Prometheus truly loved humans and tried many times to help his beloved ones to go further and thrive over the adversities. This was his major crime, preferring mortals much more than the immortals.

Also, whatever version you chose in this article, the end is always the same for the passionate Prometheus.

Furious, Zeus had to make him an example to everyone. His leadership also depended on showing that he would severely punish whoever challenged his authority and grip his kingship at all costs. The universe was won upon a great cost and effort to be given up easily, the greedy gods would take any chance to usurp his position.

The only way to fix that was to condemn Prometheus to eternal suffering. The sentence was brutal: he should be chained to a mountain and everyday and every morning an eagle should come and devour the Titan’s liver. As Prometheus was immortal, he would be alive during the whole time and his liver would regenerate at night just to be torn apart the next morning until the end of times.

At some point, after a long time of torture, his torment came to an end. The hero Heracles, on the way to steal the golden apples of the Hesperides, saw the Titan and decided to help him, killing the eagle using one of his arrows dipped in hydra’s poison before she could reach him and putting to an end the monumental suffering.

Prometheus never expressed any regrets of doing what he had done. Amongst the gods, he is known as “the trickster”. We would rather refer to him as the best friend of humankind, the only god in greek mythology that really loved humanity and has done what was best for his creation.

Stay up to date on the latest outfits, special offers and news about Find Your Quest!

Please, do not forget to check your Spam folder.